If you have a specific color you are looking for hit "Ctrl F" on your keyboard and type in the color to the box that appears, if it is not here you can ask me in a personal message at Facebook.com/RatsAreBeautiful to add in the color or to ask more specific questions about the listed information. To close the search window that appears when you hit "Ctrl F" there should be an "x" button. 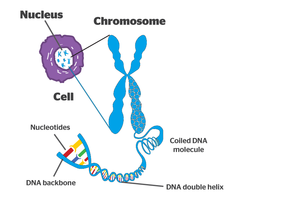 Chromosomes in Humans and Rats:

-Every animal has a different number of Chromosomes. We all get one chromosome from our mom and one from our dad in each pair. Bacteria and simple species that divide rather than reproduce with male and female simply make copies of themselves as their offspring. Chromosomes are thread-like structures located in the brain, or nucleus of every plant and animal cell. They are made up of protein and a single molecule of DNA, or deoxyribonucleic acid. The center or part where each individual chromosome indents, is called the centromere, and the ends are called telomeres. Centromere help the chromosome when it divides, which is a whole other lesson.

-Think of dominant as, "the strong one", it is shown by an uppercase letter. "Dominant = large, too heavy and can't be carried". Carried means the trait does not show up, but the rat or other species can pass the gene onto their children. These "carried" genes are called recessive. "Recessive = weaker, light and can be carried". These genes are showed by a lowercase letter. So, with a recessive gene you will have rats that either have the gene or carry it, while a dominant gene either shows up or it is not there.

-An example are the base colors of all rats agouti which is a dominant gene and black which is a recessive gene. Every rat is either agouti or black based. Agouti and black share the same genetic letter. "AA" is the homozygous dominant gene and it is agouti. Homo means same, and as you can see "AA" is two of the same uppercase letters, or two dominant agouti genes. A homozygous dominant agouti base rat can not make black base rats, it will only make more agouti.

-The black color is the Homozygous recessive gene represented by two lowercase letters "aa". When paired with a black rat the rat will become- "Aa", which is a Heterozygous dominant gene, hetero means different. This means that these rats when paired with black rats can have both black or agouti rats. A- is used if we do not know whether a rat that is Aa or AA. Both of these are agouti, except that Aa agouti "carries" one black gene "a".

Any colors that are not Agouti or Black are called dilutes, but, as states previously, every color is either agouti or black based. RED, red eye dilute "rr" , and PED, pink eye dilute "pp", are a little different, because with RED or PED the rat's eye color lightens their fur color. These dilutes are like bleach, turning the fur to an orange tint.

Modifiers are written above the genetic letters or between parenthesis example H(i)H(i) is double irish, the (i) is the irish modifier, double irish is self HH, a homozygous dominant gene, with two irish modifiers.

-Below are some of the genetic code notes I have picked up over my years studying rat genetics in chart form so it is easier to read. Because there is so little information on rat genetics online, and so much different information depending on where you look, I did my best to come up with the most accurate information I could while researching. Markings are extremely complex and some marking genetics (not listed) are still just theory so I am only getting into them briefly here and I go more into depth with colors. For any questions, suggestions, or concerns on the information listed below ask me on our facebook page listed in the Contact Information tab.
Inbreeding and Out Crossing:

Rats in the wild each have packs. In these packs they are all family. Although a lot of lines start with out crossing to get the health, temperament, and looks going in a line, inbreeding after that keeps the genes going that benefit that line. Out crossing at that point is dangerous and defeats the purpose of the line, unless the line is broken off to become two or three separate lines. However, to improve a line it is easiest to stay inline and be selectively bred for the best results. Any health issues in a line should be bred out, and out crossing into a well established line can bring sickness in after a few litters.

You could do it either way if you know the background of every rat. However, out crossing into a well established line can be dangerous and bring in sickness to the line. It is easier to selectively breed when each rat has the traits to improve the line and it is easier to know their backgrounds when they have the same background. Which works best for rats because they inbreed naturally in the wild.